Cheadle constituency has had its own flag designed by Year 5 and 6 pupils at Greenbank Preparatory School, as part of the national celebrations to mark two major events in the history of British democracy which fall this year. 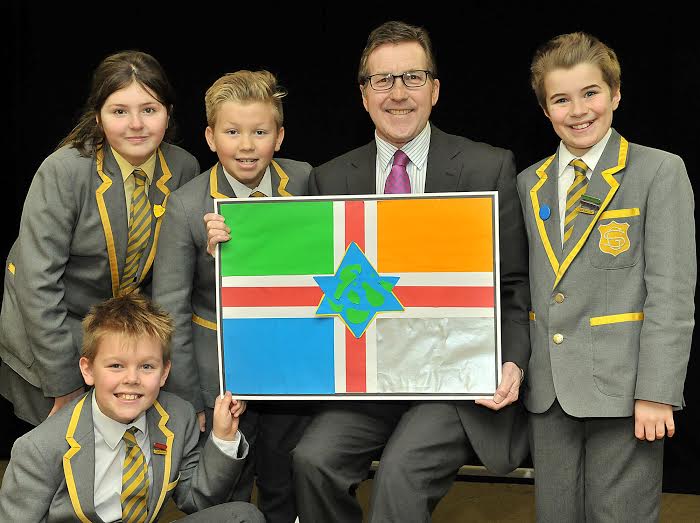 2015 marks the 800th anniversary of the sealing of Magna Carta and the 750th of the Simon de Montfort Parliament, when de Montfort summoned representatives from around the country in what has been described as the first English parliament.

Greenbank is one of 650 schools (one from each constituency) asked to design their own flags and pupils have come up with a highly symbolic multi-coloured flag reflecting Cheadle's diverse, beautiful and creative culture.  All the flags will be displayed on a special website marking the Magna Carta and Model Parliament anniversaries and Greenbank is waiting to hear whether its own flag will manufactured and then flown as one of the winners in Parliament Square.

‘I enjoyed meeting with the children to hear how they had chosen the colours for their flag and how their choices symbolised Cheadle constituency’s diversity and different aspects of our communities.

‘I sincerely hope that their Cheadle constituency flag is one of the lucky chosen few to be made into a flag to be flown outside Parliament later on this year.’

Greenbank Headteacher Janet Lowe added:  ‘It's been a fantastic exercise challenging our children's creativity and making them think about what it means to come not only from Cheadle but from England, and our relationship with the wider world.’

Greenbank's Year 6 designers have explained the symbolism behind the flag.

Ben Holmes said: “The orange quarter represents happiness and the fact we all feel happy to live in Cheadle. The green represents our lovely countryside, and the fact that we are all trying to become more eco friendly.”

Cameron Hyde added: “The blue is for all the water in the ponds, the streams and the rivers; not to mention the rain fall.”

Ollie Harrison said: “The grey is about the area's commercial record and how business thrives in Cheadle.”

Olivia Aylett added: “The white at the centre is about the peace and harmony and the star says that everyday is a new day and a chance to shine.”