Earlier this week  Mark Hunter MP attended a reception held by Living Streets and made a pledge to keep on campaigning to reduce the default speed limit to 20mph in all residential areas to make walking safer and easier for older people. 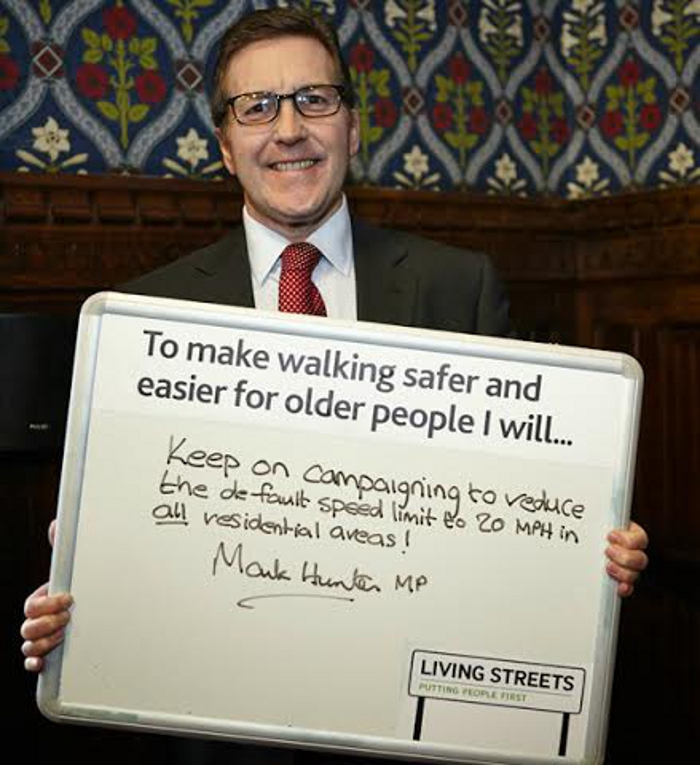 The event followed the results of a YouGov poll commissioned by the charity which found that 62 per cent of people, aged 65 and over, believe that measures to improve streets for older people on foot are an appropriate priority for the next Government.

The MP for Cheadle constituency also met with pedestrian campaigners and Living Streets supporter Shelia Blaker, aged 80, who talked at the event about the obstacles and hazards she often encounters on her local streets which can deter her from walking.

‘Walking is great exercise which benefits our health and well-being at any age, but as we get older it’s important to be able to get out and about in our communities, see friends and neighbours and be able to access essential shops and services.

‘It’s all too easy to overlook the needs of more vulnerable pedestrians so today has been a great opportunity to hear about some of the things which can be done to make walking safer and easier. I think that reducing the speed limit in all residential areas to 20mph would be is an important first step.’

‘We know that things like pavement parking, insufficient time to cross at signalised crossings and high traffic speeds deter people from walking, but particularly older people. Sadly it means they can end up isolated.

‘Today we’re asking MPs to pledge their commitment to making walking safer and easier for older. Living Streets believes this can be done best via an Active Travel Bill and as parties draw up their manifestos in the run up to the General Election, we hope they’ll take note of the public health, environmental and economic benefits of making our towns and city centres walkable for everyone.’